We all have those moments in our lives when discovering and deciding what we want just doesn’t come easy. At times like this, one of our biggest allies is very close-by: our very own brain. This amazing organ holds vital keys to unlock our way towards the future. The trick is to find out just how we can best tap into the potential that’s right there, ready to be used.

But first, I need to tell you a little bit more about how your brain actually works. This month’s Insight focuses on helping you understand some key features of the human brain’s functioning, including some tips at the end on how to keep your brain fit and agile.

In the upcoming February edition of Maxand’s Insights, I will then build on this foundation and tell you more about how to make the most of your brain’s capacities in discovering what you want.

1. So what does your brain have to do with discovering what you want?

There are a number of ways your brain plays a key role in discovering what you want¹.

The human brain has an incredible ability to change and adapt. Its flexibility (also called “neuroplasticity”) goes far beyond imagination. It can help you master new skills, develop relationships with people you’ve not met before, change habits, adapt to new environments, manage your emotions et cetera et cetera. Your brain is an amazing source of potential for the road ahead.

2. What comes naturally … and what doesn’t

Your genetic make-up, the way you’ve gone through critical development stages while you were growing up and the way you’ve lived your life so far are all reflected in your brain.

Your brain first of all reflects parts of your “core” characteristics. Things that generally don’t change very much over time, for instance key elements of your personality. But also things that tend to be a little bit more alterable, such as the skills you’ve gained, the habits you’ve developed, the feelings you’ve come to attach to events, things or people et cetera.

With your genetic make-up and personal history imprinted in it, your brain plays a vital role in what comes easy at this particular time in your life. But also in what gets you out of your comfort zone and what might conflict with some of your core characteristics. This is also likely to have an impact on what you would (or would not) consider for the future.

3. Ability to think and reflect

And lastly, but very importantly, your brain allows you to use language. This enables you to reflect on your experiences, thoughts and emotions. To really take a step back and – if needed – to consciously choose an alternative path, which can be critical in discovering and deciding what you want.

Being able to use language also means you have the – from an evolutionary perspective rather unique – ability to connect with others on things that are less tangible or not present at this very moment. Such as memories of events that happened in the past and how they affected you. The way you feel and think about things. Abstract notions such as happiness and fulfilment. The dreams you may have for the future and the opportunities and challenges you could envision along the way. Ideas about how you can perhaps move forward.

It’s an ability that tends to be taken for granted, but one that takes centre stage in discovering what you want.

Right this very moment, as you are reading this text, cells in your brain are sending signals to each other. Your eyes register the random black shapes on the white background of your screen.

And somehow, they become letters. The letters become words. The words become sentences. Sentences that may mean something to you. They may make you think or wonder. You may decide to agree with me … or not. And all this, even if English isn’t your mother language!

Through your eyes, ears, nose, mouth and skin, your brain processes other information about the place you are in now. The noise of cars perhaps, or the chatter of friends, the chill of winter, the taste of pizza, the smell of Cambodia flowers in a tropical night or the tough surface of your chair pressing into your legs. You may not even be aware of it all.

Your brain plays a central role in using your fingers to scroll down this page on your smartphone, tablet or computer. In checking incoming messages at the same time. In them making you perhaps feel happy, angry or very much in love with someone. And, oh dear, a thought just popped up from somewhere in your memory, making you realise that you forgot to buy shampoo when you were doing groceries.

So how does this actually work?

A. Some quick facts 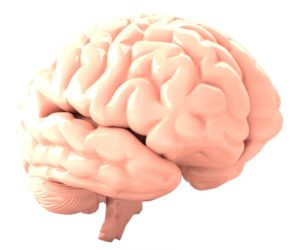 Your brain looks a bit like a cauliflower. If you’re an adult, it weighs in at approximately 1.5 kilograms.

Around three quarters of your brain is water. The remaining solid part of your brain consists for 60% of fat, making it the fattiest organ we have.

Scientists have shown that our brain uses more energy than any other organ. It takes up 20% of the daily energy your body needs.

So if you take an average energy requirement of 1,300 calories in resting state, then the brain uses around 260 of those. That equals half an hour of jogging … or the energy provided by a small meal like 1 slice of whole grain bread, a little bit of butter, 1 boiled egg and a small glass of orange juice.

Most of this energy, around two thirds, is used by brain cells to send and receive signals. The remaining third is used for “housekeeping” or basic cell maintenance.

B. Your brain as a big communication network

If you look very, very closely, your brain is made up of tiny “communication centers”, called neurons. They are spread across different parts of the brain that are highly interconnected, but that each also have some particular core function.

Neurons communicate with each other through “branches” called axons and dendrites. Axons take signals away from the cell’s center to other cells; dendrites transport signals from other cells towards the cell’s center. Information is transferred at the tip of the branches (at so-called synapses) through electrical and chemical signals.

Basically, it’s a huge network with hubs and connecting tentacles.

Now, reading this article, or raising your arm, or talking to a friend, or taking a math test, or being nervous … it’s not all simply a matter of 1 neuron sending 1 signal to 1 other neuron. Depending on the complexity of what you do, think or feel, it could take millions of neurons to send signals in intricate patterns across different parts of your brain!

Have a look at this short 5-minute video offered by the National Science Foundation (NSF) in collaboration with The Brain Initiative and NBC Learn as part of the “Mysteries of the Brain” series. It gives you a nice overview. If you find subtitles helpful, just turn on “Captions” under the “CC” sign in the bottom of your screen.

C. The complexity of your brain’s network

So how complex is your brain’s network? How many neurons does it hold? As you can imagine, it’s rather difficult to count the number of neurons in a human brain. A number that has been commonly used in case of an adult human brain is 100 billion (100,000,000,000), but a groundbreaking study by Brazilian neuroscientist Suzana Herculano-Houzel has suggested that the actual number may be less; around 86 billion³.

Now, the subjects in her study were all adult men and there were very few of them, so although her methods resulted in a big improvement on earlier estimates, we should await the results of more studies. What is clear, however, is that the human brain holds very, very, VERY many neurons. Even 86 billion is still a very difficult number to grasp!

Neurons can each have tens of thousands of synapses, with some very particular neurons even as many as 100,000! Try to imagine the total number of synapses in your brain! Or to imagine even a small chunk of them transferring signals, right now as you read this, or every second of your life for that matter! And then we haven’t even started talking about other supporting cells that are also present in the brain, such as glial cells …

The next video – with its 10-minute duration – may be a bit longer than the usual article video, but it’s well worth watching if you’d like some additional background. In the video, offered by BrainFacts.org, neuroscientist Suzana Herculano-Houzel explains and debunks some common myths about the human brain. Again, if you find subtitles helpful, just turn on “Captions” under the “CC” sign in the bottom of your screen.

As will have become apparent, your brain is a highly complex organ. Its complexity gives it a number of constraints, but also an enormous potential to change and adapt. As said, more about how to make the most of your brain’s capacities in discovering what you want in the upcoming February edition of Maxand’s Insights.

But for now, let me leave you with some practical tips. The overview below includes a number of effective ways to keep your brain fit and agile, all supported by an increasing body of scientific research.

If you’d like to get some more background information, there are plenty of sources around, but a nice compilation based on scientific studies is included in “The SharpBrains Guide to Brain Fitness: How to optimise brain health and performance at any age” by authors Alvaro Fernandez and Elkhonon Goldberg Ph.D. with Pascale Michelon Ph.D.. They provide the visualisation below as an overview of measures to optimise brain fitness.

4. Want to learn more about the brain?

If you’re interested in more information about the brain, have a look at the online platform www.brainfacts.org.

BrainFacts is a public information initiative of the Kavli Foundation, the Gatsby Charitable Foundation and the Society for Neuroscience, all global non-profit organisations dedicated to advancing brain research.

Another source you may find useful is the Dana Foundation, also a global non-profit organisation dedicated to advancing brain research and providing responsible information about the brain to the public. The Dana Foundation coordinates, amongst other things, the global Brain Awareness Week effort, which you may want to check for any activities near you.

1. Assuming that there is no trauma or disease that affects the functioning of the brain.

3. Also see the article “The Human Brain in Numbers” by Suzana Herculano-Houzel, published in Frontiers in Human Neuroscience in 2009 (3:31) and made available online in November 2009.

All well here fortunately. I just haven't had a chance to share any new articles with you. Plenty of topics in the pipeline though ...

I'm aiming to be back on track with writing this summer. In the meantime, I hope the current articles are providing you with useful tips and insights.

And as always, if you have any questions, just drop me a note.