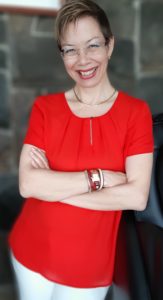 My name is Eveline de Vink. I was born in the Netherlands, a small country in northwestern Europe, where I grew up and spent most of my life.

These days, I live and work in other places around the world, taking on assignments as psychologist and strategic HR & organisational change expert.

My current home is Jakarta, where I work as Director of the Netherlands War Graves Foundation in Indonesia, overseeing work at and around our 7 war cemeteries across Java where around 25,000 Dutch victims of war have found their final resting place.

I come from a multicultural family. My parents were born in the former Dutch Indies, current-day Indonesia. Descendants of early European settlers in the East and their European or Asian spouses.

They were both born right before the start of WW-II in Southeast Asia and spent their early childhood in concentration camps for women and children. Conflict continued after the war as Indonesia fought for independence, and in the 1950s my parents’ families were given the choice to either stay and become Indonesian citizens or move to the Netherlands. Torn between two countries – one they knew but did not feel entirely safe in, and one that seemed to offer safety but that was unknown – they made their choice. They moved. And they rebuilt their lives from scratch in their new home country.

My parents ended up raising me in a mix of two cultures: the Dutch combined with an Asian culture of times past. But also in a mix of two eras: the peace and prosperity I grew up in as opposed to the war and exile they had known. And while I was quite oblivious to it when I was younger, this has always given me a range of different perspectives. On life in general. And more specifically, on how people decide what to do with their lives.

Perhaps that’s why I’ve always loved talking with people about what it is they want. Sometimes just for the fun of it. Sometimes because there was a need to do so. A friend who felt stuck in his life and unsure where to go next. Or a relative looking for something completely different, something new and exciting. A colleague about to lose the job he held for 21 years. Or a business owner faced with determining the next step for her company.

I find it absolutely fascinating how we – as a species with thoughts and emotions, language and culture – determine what we want. The same words, and yet the question is different every time we ask it. Depending on what context we are in, where we live in the world, what phase our life is in. Or perhaps it’s not so much the question, as it is the range of possible answers. Every life is unique. And there are always other ways to live it …

I am a psychologist by training, but I’ve had the honour and pleasure of doing many different things in my professional life.

The quick story is that I started my career doing scientific research, then moved on to coaching, training and leadership development, before ending up in different kinds of management roles. The details are probably not relevant here, but if you’re interested in a more comprehensive overview, just have a look at my LinkedIn profile.

The single stable factor in my career is that I’ve always worked with people and organisations facing some kind of major change, with leadership development usually being one of the critical success factors.

Other than that, things have always been different. I’ve worked at small companies with only a few staff, but also at global multinationals with over 120,000 employees. The organisations I did assignments for were both profit oriented as well as non-profit, and active across very different industries. My work was sometimes very local in small towns in the Netherlands, but I’ve also held international roles that have taken me across the world, teaming up with colleagues of many different nationalities.

And everywhere, I’ve ended up speaking in-depth with people about what they wanted. Both privately as well as professionally. It’s these engagements that continue to inspire some of the thoughts and reflections I’d like to share through Maxand.

Curious about Maxand’s mission or origin, or want to read some of Maxand’s insights? Just click the links below for more information:

You've not heard from me in a while. Unfortunately for a sad reason. My dearest brother Siegfried fell ill with cancer and passed away recently. I've not yet been able to get back to writing any articles. There are plenty of topics still in the pipeline though, so expect to hear from me in the future ...

In the meantime, I hope the current articles are providing you with useful tips and insights. And as always, if you have any questions, just drop me a note.